How often do you get the chance to create a memory which lasts a lifetime?

The Ultimate Marriage Proposal Gesture in the most Romantic Location. That is what we deliver.

Just look at her face,

This shot was sent to us by Danni’s sister who was in on the little plot.
“What a great idea for a marriage proposal” said Danni. 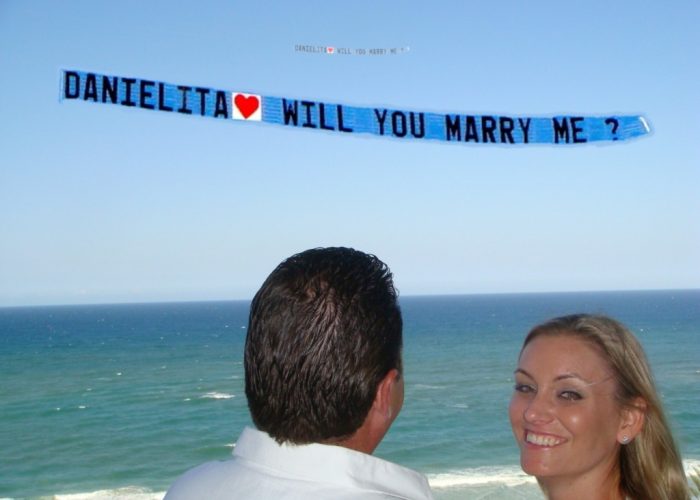 I have seen a grown woman levitate at the sight of such a wedding proposal. The fellow in question was a very shy chap and had been postponing propositioning his long time girlfriend because he was worried he would “Mess it up”. I suggested a  lunch time picnic on a headland over looking the sea and we fly by with his message.
As the airplane Towing his Marriage Proposal rounded the headland, I could see the chap nervously standing searching for the Banner, His girlfriend was sitting on a blanket with the picnic laid out in front of her, unaware of what was about to happen.
The chap turned towards his girl and pointed to the plane, upon sighting the proposal this lady, somehow, (and it still baffles me to this day how she did it) she went from sitting on the ground; to having her legs wrapped around the chap’s stomach in the blink of an eye.
A long embrace followed, and I did not need to get a text message to know the answer to the air banner. Mission accomplished !

Writing your message of love across the sky with an Aerial Banner Message is the most Unique Romantic Special Magical Memorable Epic way to propose the most important words you will ever say.

What could be more unforgettable?

Guaranteed to give you brownie points that last forever

SKY-ADS is the Gold Coast’s only Skywriting Specialists.
With years of experience we guarantee that your Unique Marriage Proposal is delivered in the most memorable way possible.
Just 3 easy steps and we will circle your location enough times to get a nice cuddle and still have time to snap a picture.

To give you some pointers we have put all of our experience into a guide.
Below is a quick summary

To ensure your success, SKY-ADS has prepared our Marriage Proposal Guide to inspire you to create the most spectacular wedding proposal ever. 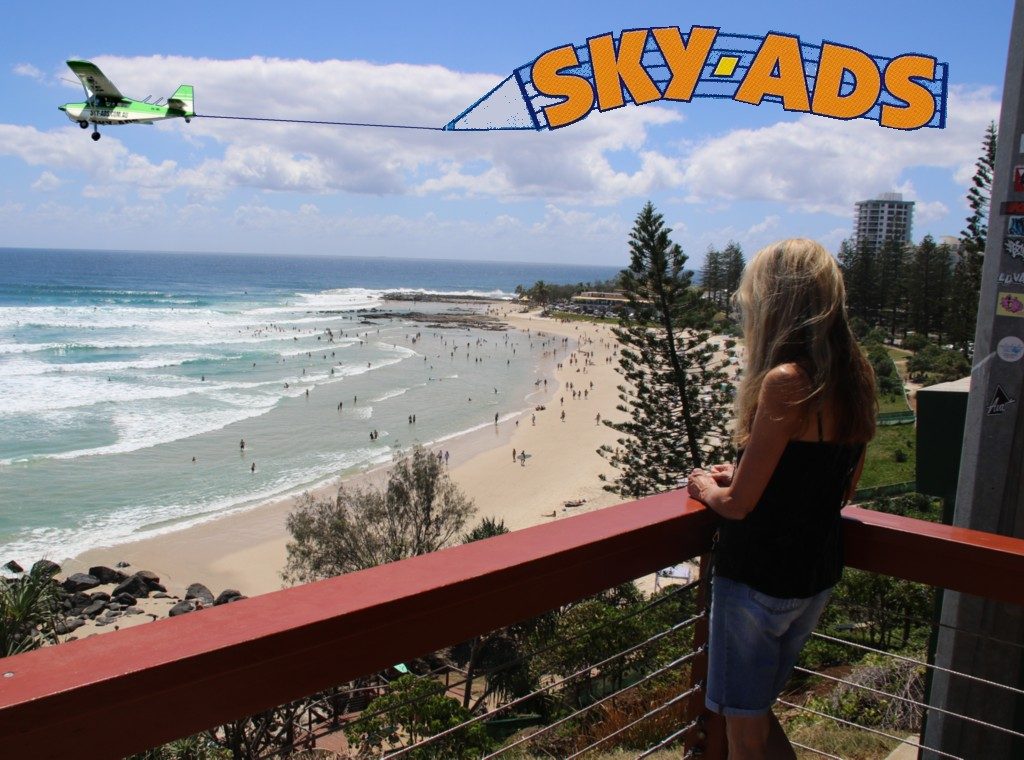 Step 1 of our Marriage Proposal Guide discusses all the things that you should consider when selecting a Romantic Location for you to propose to your Love.

There are lots of romantic location suggestions for you to consider.
But the sky is yours the Gold Coast and surrounds are full of great locations

Step 2 of our Marriage Proposal Guide is all about getting the message right.
There is no better way than to write your message of love across the sky!

Our Method of skywriting lends itself perfectly you have up to 35 letters to express your desire, but spaces do count.

SKY-ADS is the only choice for a aerial marriage proposal

Once you have chosen your message. We deliver your message written across the sky in the most memorable way possible. 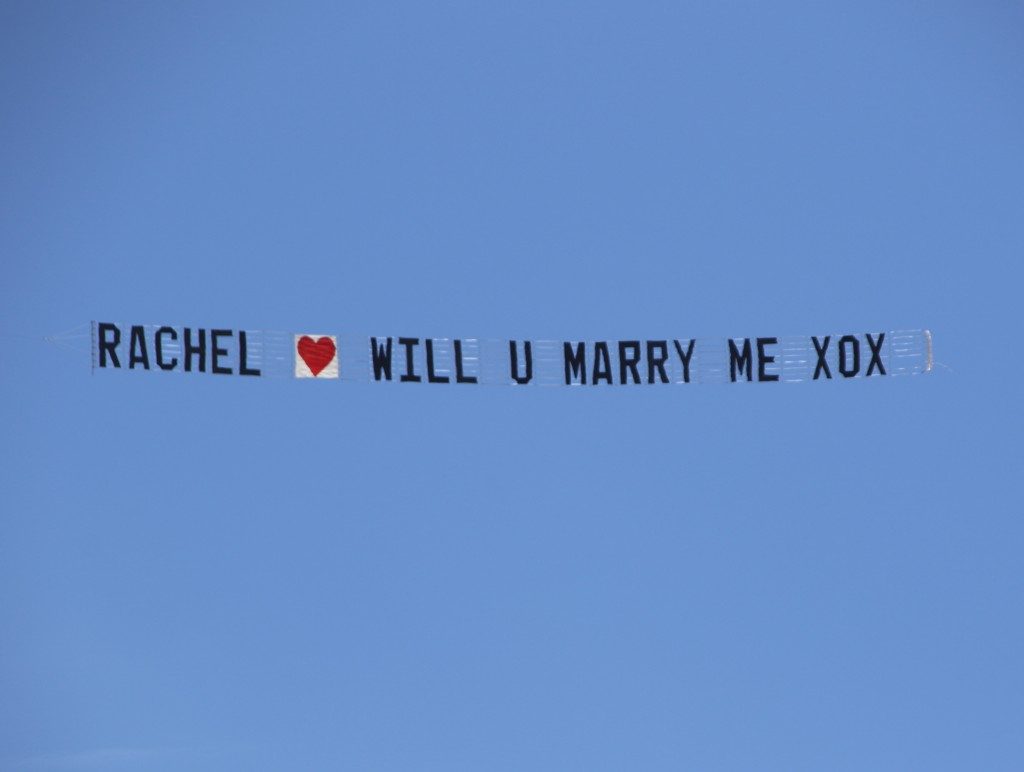 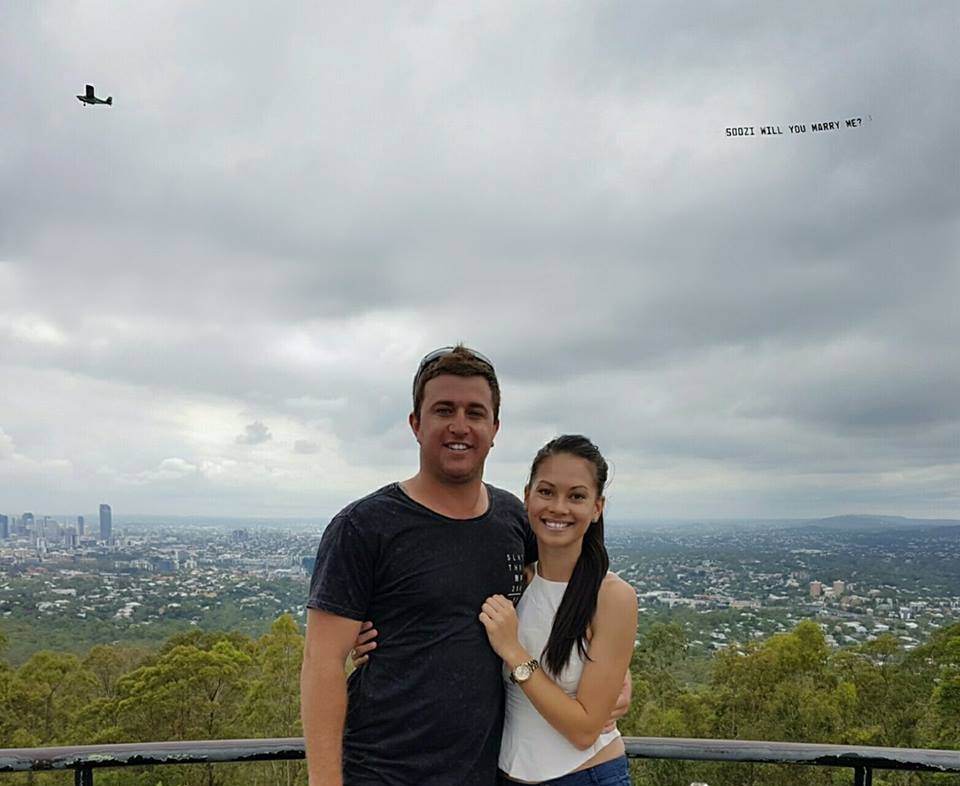 We discuss Early Starts, Lunches and Dusk. Relating the benefits and possible issues of each. So you will be able to avoid any pitfalls. And thereby pull off the most remarkable marriage proposal for your companion.

We also give heads up on what you can expect from us and what possible reaction(s) you may expect from the love of your life.

All that remains now is to fill in our Booking Form and SKY-ADS will do the rest.

We will assemble the message and fly to your location.
Usually plus or minus 10 minutes of your requested time.
We can send you an ETA via Text Message or you may prefer us to Maintain Radio Silence. It is up to you. The choice is yours.

All you have to do is keep calm and enjoy the ride.

Please make sure you have a nice long cuddle before you worry about pictures.
We will circle plenty of times… 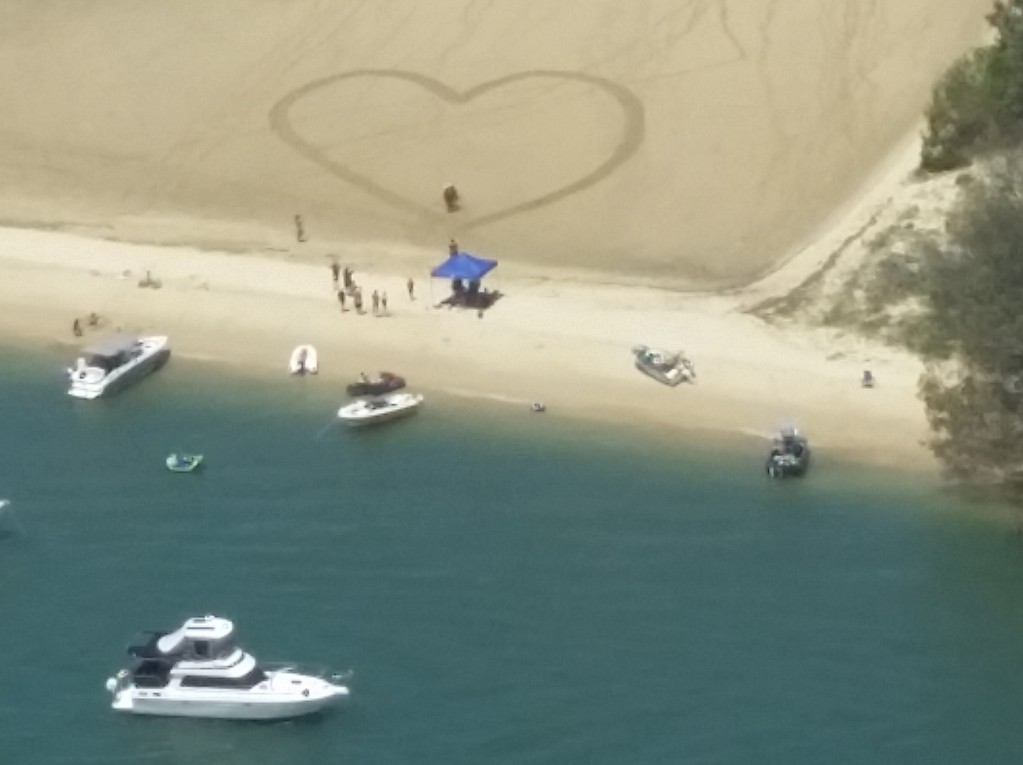 Only Trust SKY-ADS with your Marriage Proposal

SKY-ADS has created happy memories for many couples over the last over 35 plus years. We know all the best ideas to have your Marriage Proposal go off smoothly and be displayed in the best possible manner. The last part is important, SKY-ADS might make it look easy but that is our skywriting experience showing out.
You can not trust anyone else with such an important message. No skywriter in Australia is more experienced at delivering Flying Signs!
Only SKY-ADS has over 4000 hours of Banner Towing experience to ensure your message is displayed correctly.
SKY-ADS will make your display memorable, Guaranteed.

Why is a Sky Banner the best way to propose marriage?

You might be thinking that getting a plane to scribble your message out in smoke might be a more romantic form of skywriting? Yes but. There are several drawbacks to the old school method of skywriting. You can refer to our Comprehensive Guide to Skywriting for more information about the different types of skywriting.
Or we can explain quickly.

Smoke skywriters are very limited in the number of letter which can be displayed.
There are two reasons for this. 1. Running out of smoke oil. and 2. letters get blown away before the message is finished.

Weather has to be perfectly clear for smoke

Looking at this picture you think. Fine Day, right?
But I am afraid that Smoke Skywriting could not happen on this day. The upper winds are too strong and there is too much cloud to see the smoke clearly..
This restriction on weather is a real problem for a Marriage Proposal. Because it needs to happen when you are ready not when mother nature decides. 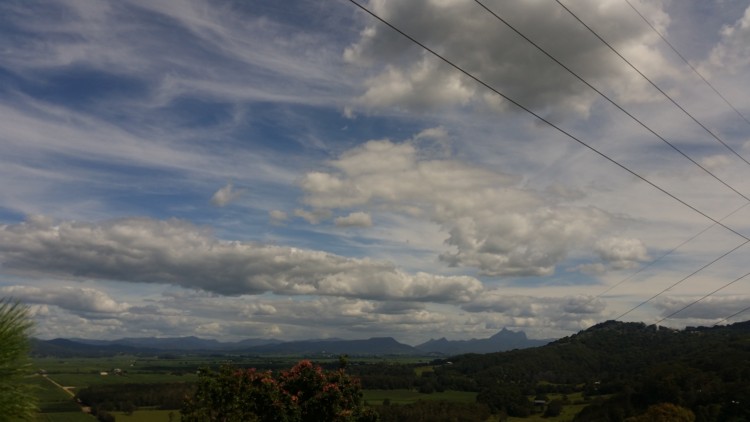 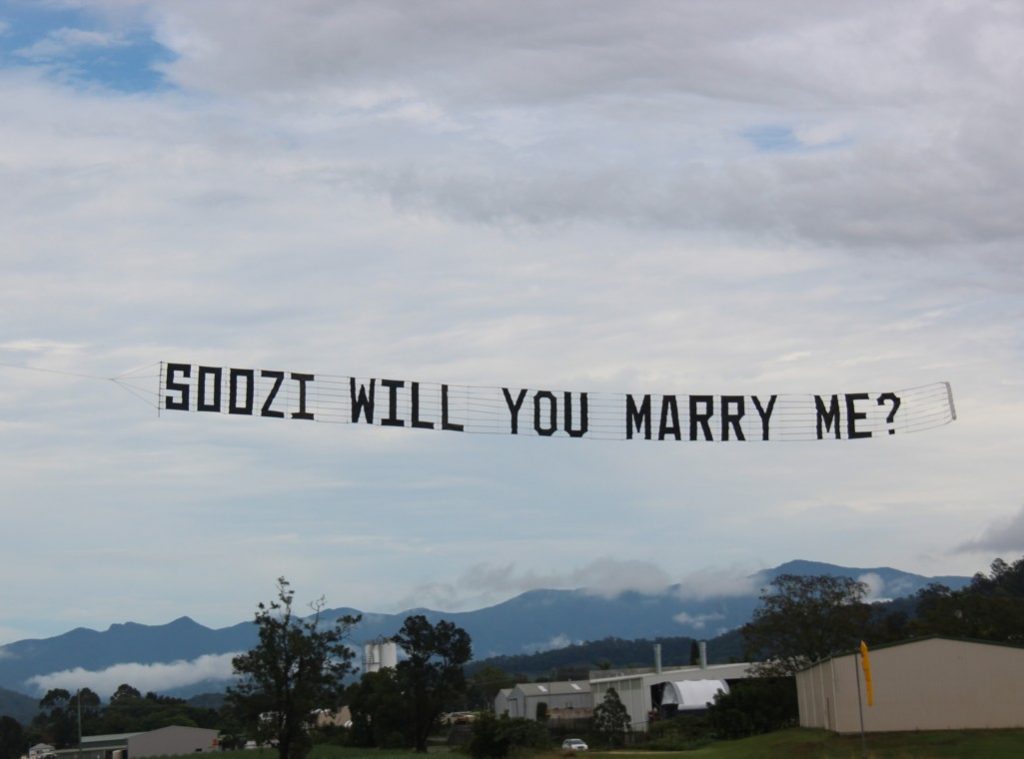 Sky Banners have none of these problems. We will write your message across the sky behind our aircraft. Your message is 1.5 meters high and up to 35 meters long. And most importantly perfectly readable from start to finish. Then we circle around several times to really bring home the effect.

No other Marriage Proposal could have such a memorable impact!

After you are finished looking though our Marriage Proposal Guide. We hope you will have discovered some great ideas.
But if you are still struggling we would love to chat. Just call us on 0412166692 or email info@sky-ads.com.au