Skip to content
What notice is required to get a message in the air flying behind a plane?

At SKY-ADS We can get messages airborne within 24 hours

What Lead Time is required to produce Aerial Billboards?

Upon receipt of artwork our team works very quickly and can produce monster size flying billboards in a very short time frame.
But to be safe 3 to 4 weeks should be allowed.

What Format does the Artwork need to be for a Sky Billboard?

How much does a Sky Billboard Cost to be produced?

Aerial Billboard production is a once off investment and depends on size and artwork POA Give us a call to discuss
The investment to display your new Sky Billboard to all the people is the same as flying a Banner behind our plane.

How much does an Airplane Banner cost to fly past?

What types of messages can you fly behind a airplane?

Whatever you want. Up to 35 charagters can be flown behind our aircraft. Spaces between words count.
Business Advertising, Marriage Proposals, Gender Reveals, Happy Birthdays, Congratulations, Just Married, Vote 1, Protest Messages, Valentine’s Day, Events, Book Now, I Love You…. Etc.
You think it up and we can write it across the sky!

Where is the best location on the Gold Coast for a Marriage Proposal?

The best location is one where you can relax, is beautiful and you can enjoy a picnic lunch.
We have compiled a list of the top 10 Gold Coast Locations for you – Click here.
Number 1 is Point Danger Lighthouse – ticks all the boxes! 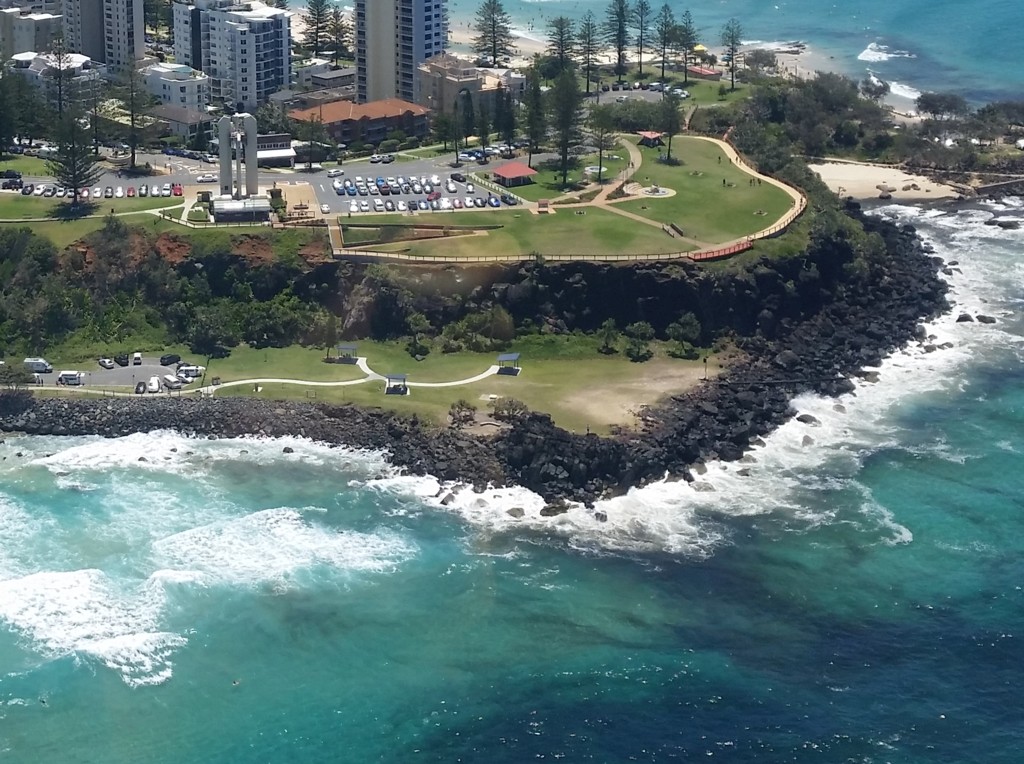 Is Banner Towing available in Sydney?

Our aircraft is configured for Towing Aerial Displays. Which means it doesn’t ferry well. This makes doing Sydney uneconomical.
The good news is that a cheap weekend accommodation and airfare package along with a personal message banner tow is still cheaper than a Banner Tow alone in Sydney. A Personal Messages anywhere on the Gold Coast is only $880.
So you get a nice weekend on the Gold Coast and your banner message towed behind an aircraft for less money than just a banner in Sydney!

Is Banner Towing available in Melbourne?

Our aircraft is configured for Towing Aerial Displays. Which means it doesn’t ferry well. This makes doing Melbourne uneconomical.
The good news is that a cheap weekend accommodation and airfare package along with a personal message banner tow is still cheaper than a Banner Tow alone in Melbourne. A Personal Messages anywhere on the Gold Coast is only $880.
So you get a nice weekend on the Gold Coast and your banner message towed behind an aircraft for less money than just a banner in Melbourne!

How do signs behind aircraft get into the air?

There are two methods of Launching Banner behind an aircraft.
1. Ground Launch
2. Aerial Launch
With the ground launch method the Banner, Billboard or Combination is laid out on the runway in front of the aircraft. The Short Take Off & Landing (STOL) aircraft then takes off past the display. When the rope runs out the display comes with the aircraft. Therefore the STOL aircraft has twice the rope length to take off and get established airborne before the Display takes off. This is the most efficient method of launching a sign behind a plane. But it requires a STOL aircraft and an experienced pilot.
If you do not have a STOL aircraft or your pilots are not good enough. You then use the Aerial Launch or Aerial Pickup method. The Display is laid out in an open area with a rope leading away to a loop of rope, which is held up on two poles. The aircraft takes off normally. A hook attached to the aircraft is thrown out during the circuit. The aircraft then swoops down and attempts to snag the loop of rope with the hook. This method is not as efficient because of the flying time wasted doing circuits attempting to catch the Display.
While the Ground Launch method looks more risky. It is actually the safer method as it eliminated the risk of catching the Loop of road with the aircraft’s undercarriage and therefore not being able to drop the display.
Click Here to see SKY-ADS launching a Banner behind their plane. 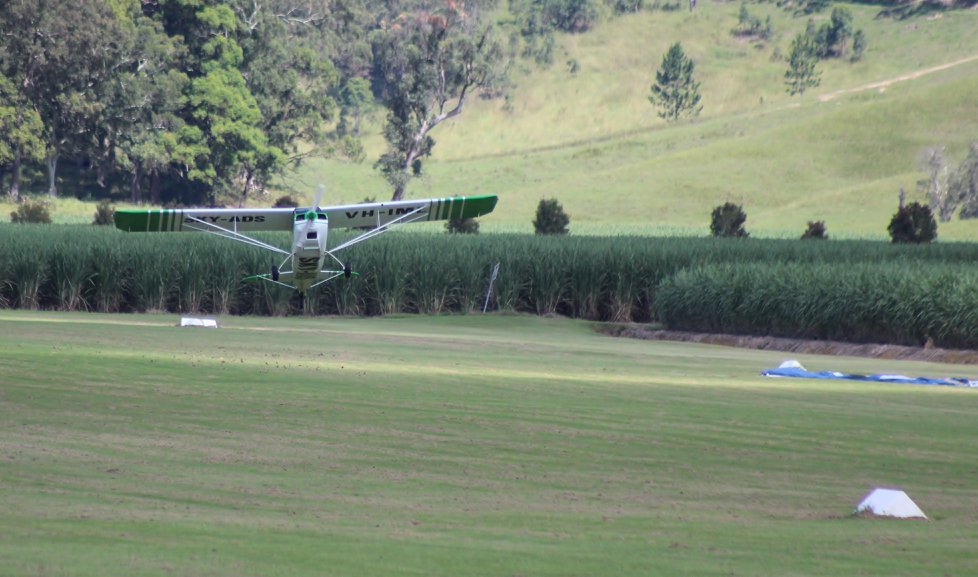 How do planes with a banner behind land after flying with a sign?

When we have finished our display route. We simply fly low over an airfield at 100 feet and release the sign. All aircraft towed banners are very safe because they have their own parachute attached at the back. The parachute is what keeps the sign readable.
In the unlikely event of a sign being detached higher than 100 feet. The sign’s parachute stops it falling and it gently settles to earth. 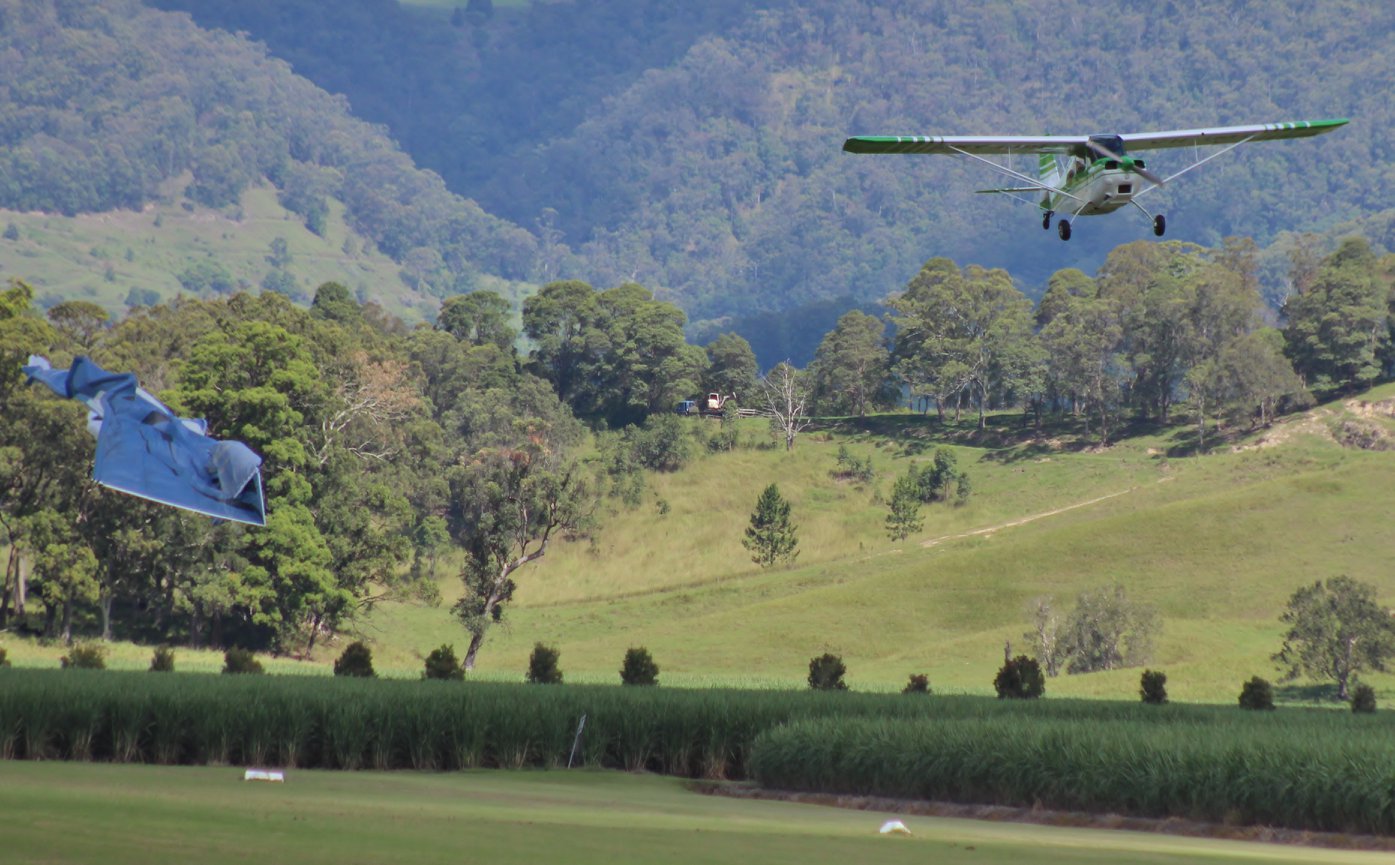 Can SKY-ADS drop Colour Bombs for Gender Reveal Parties from an Aircraft?

Yes – in addition to our Gender reveal Banner service we have now perfected dropping Pink or Blue Colour Bombs from our Aircraft.
Our colour bombs will make your Gender Reveal Party into the ultimate event you deserve.
More detail can be found here.